A hungry giraffe and my sewing machine

I have never been this close to a giraffe! 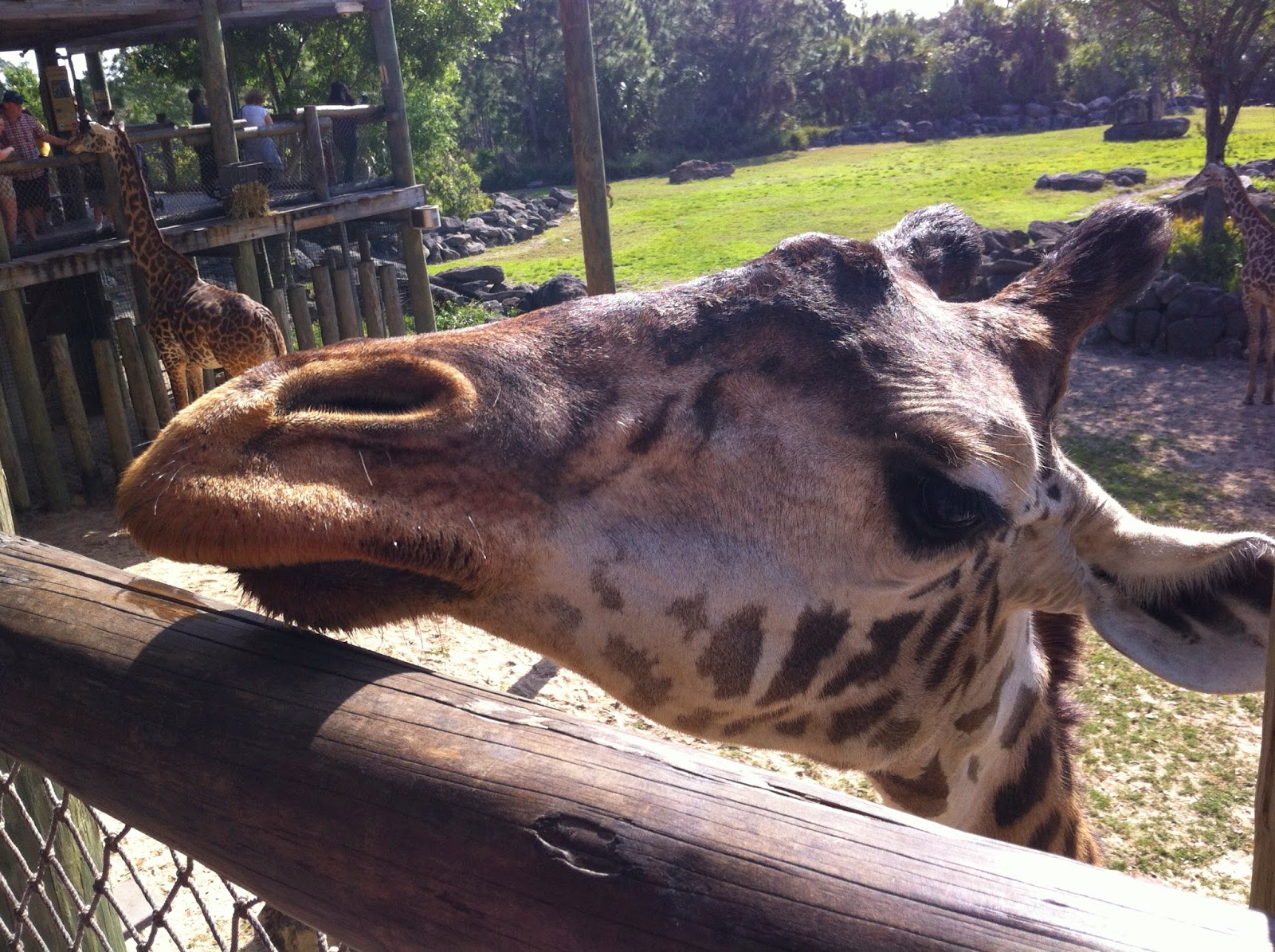 We just returned from a quick Spring Break trip.

This week began with a soccer game in Jekyll Island Georgia, where I was fortunate enough to see a dolphin in the water right behind the soccer field.

Luckily, the bugs weren't too bad this time.  They only got us a few times.

I don't have any pictures of that.

It's so nice to visit that area of Georgia, but bug spray is a must.  I'm not kidding.


Later in the week, we took a fun trip to the Kennedy Space Center and the Brevard Zoo.

We spent a few days in the Merritt Island, Florida area, seeing the sights and eating some great food. 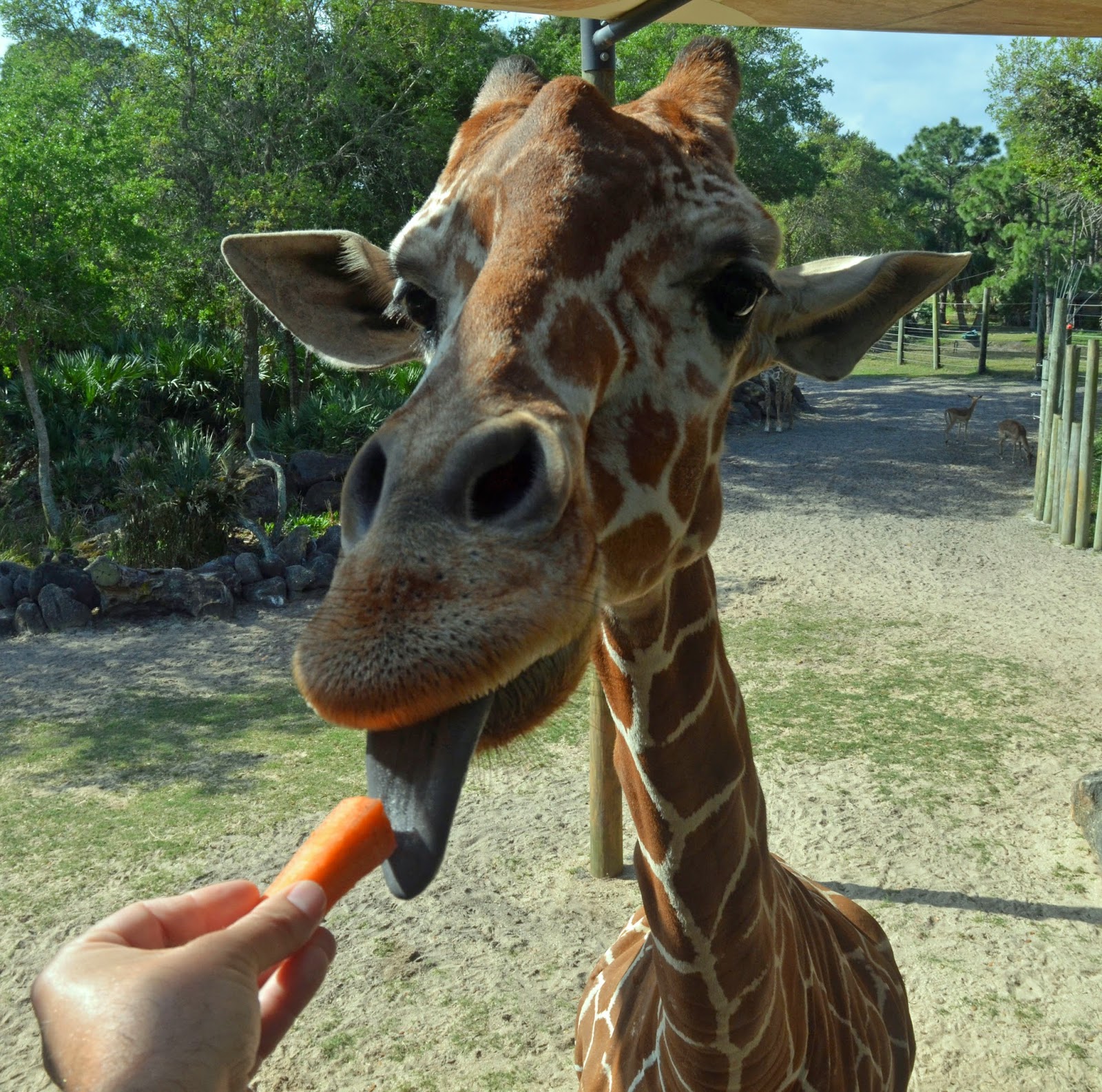 At the Brevard Zoo, we were able to feed the giraffes!

They come right up to you and eat, what we think was a sweet potato, right out of your hand. 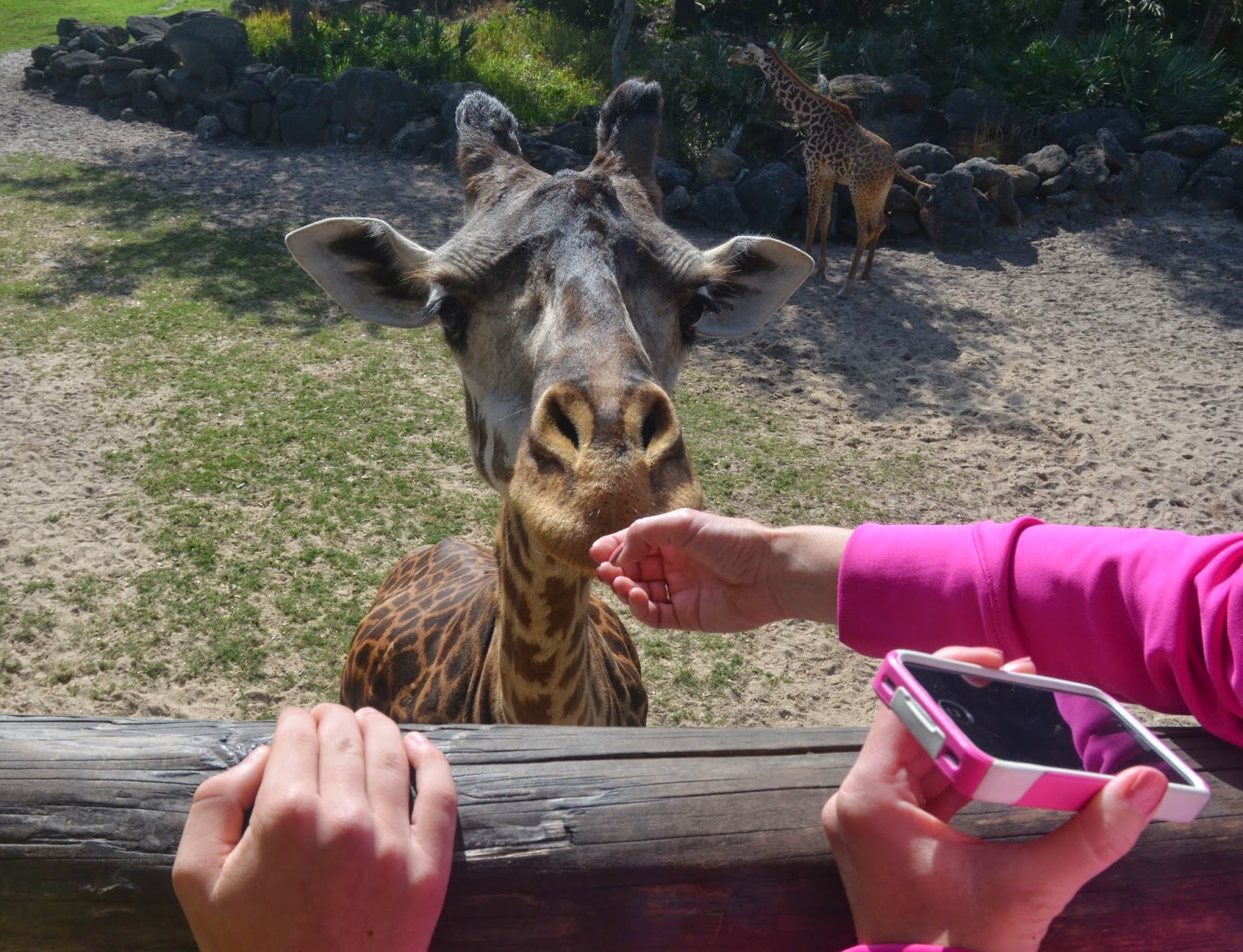 It was amazing to see these sweet and gentle creatures so close up!

You can see my pink jacket and my pink iphone in this picture.

The other hand is my son's, who fed the giraffe too. 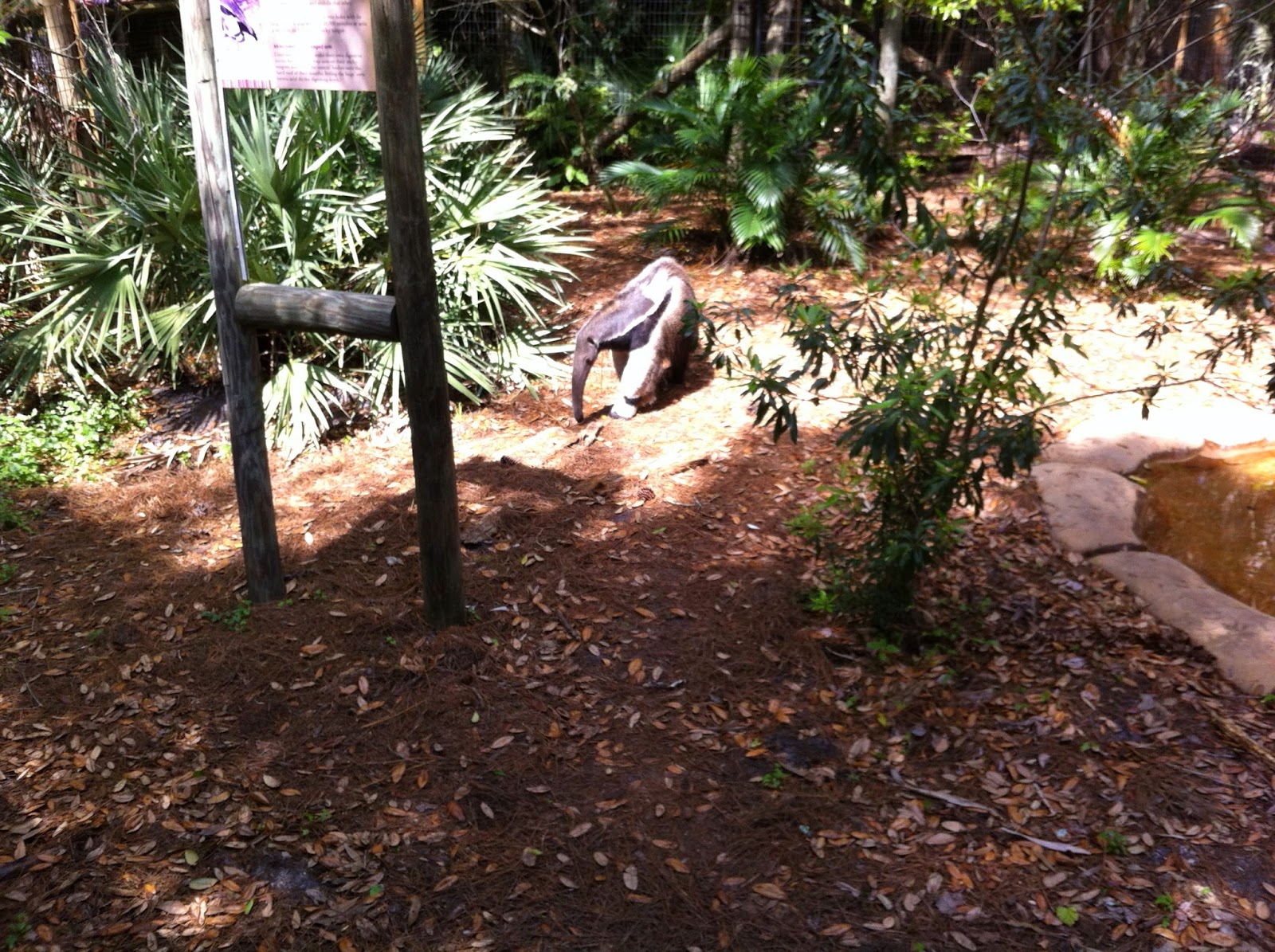 We had been thinking about going to the zoo on our second day there, then we saw the posts by my friend Lois about her recent trip to the Brevard Zoo and we decided we had to go.

I took a picture of the same Giant Anteater that Lois wrote about.

My teenaged son loved the Anteater and he also enjoyed kayaking through the zoo!

We all got in kayaks and took a trip through the zoo!

That was pretty cool! The Kennedy Space Center was probably the highlight of the trip for my "math - science boys" and I enjoyed it too.


The new Atlantis Space Shuttle Exhibit was really interesting and also we took an extra tour out to Launch Complex 39A.

It was originally built for the Apollo program and later it was used for Space Shuttle launches.

Ours was one of the last tours to Launch Complex 39A, as it will soon be leased out for commercial use.

There is so much going on at the Kennedy Space Center!

What does my sewing machine have to do with any of this?

Well, I dropped one of mine off for a cleaning on our way to Merritt Island.

When I picked it, up they told me that some of the issues I had been having with the case for a few years, light hanging down slightly and the buttons sticking, were warranty issues that were easily fixed with a new front cover. WooHoo!

That's not what I had been told at a different shop a few years ago.  I was told that those things were going to be pricy fixes and I was better off waiting for the light to burn out before I got it fixed.

I'm so glad I took it to this sewing machine dealer for a cleaning this time.  It is usually out of the way for me, but I decided to take it there since were passing by on our trip.

Because of the change in the front cover, this issue leads to a new slide on table under warranty if I bring in my old one.

While looking for my old slide on table in my closet last night, I noticed it smelled a little musty in there.

So, on this rainy day you will find me cleaning out my closet and getting rid of some things.  I'm thinking I've just got too much in there, most of which I don't even wear anymore, and just not enough air circulation in that closet.

Cleaning out closets is not my favorite thing to do, but I'll be making a run to Goodwill later in the week to give some of those things away.

Maybe I'll take a break later and look at some quilt books that I've been meaning to read!

Not a bad thing to be doing with a sewing machine at the shop!

This one is mine 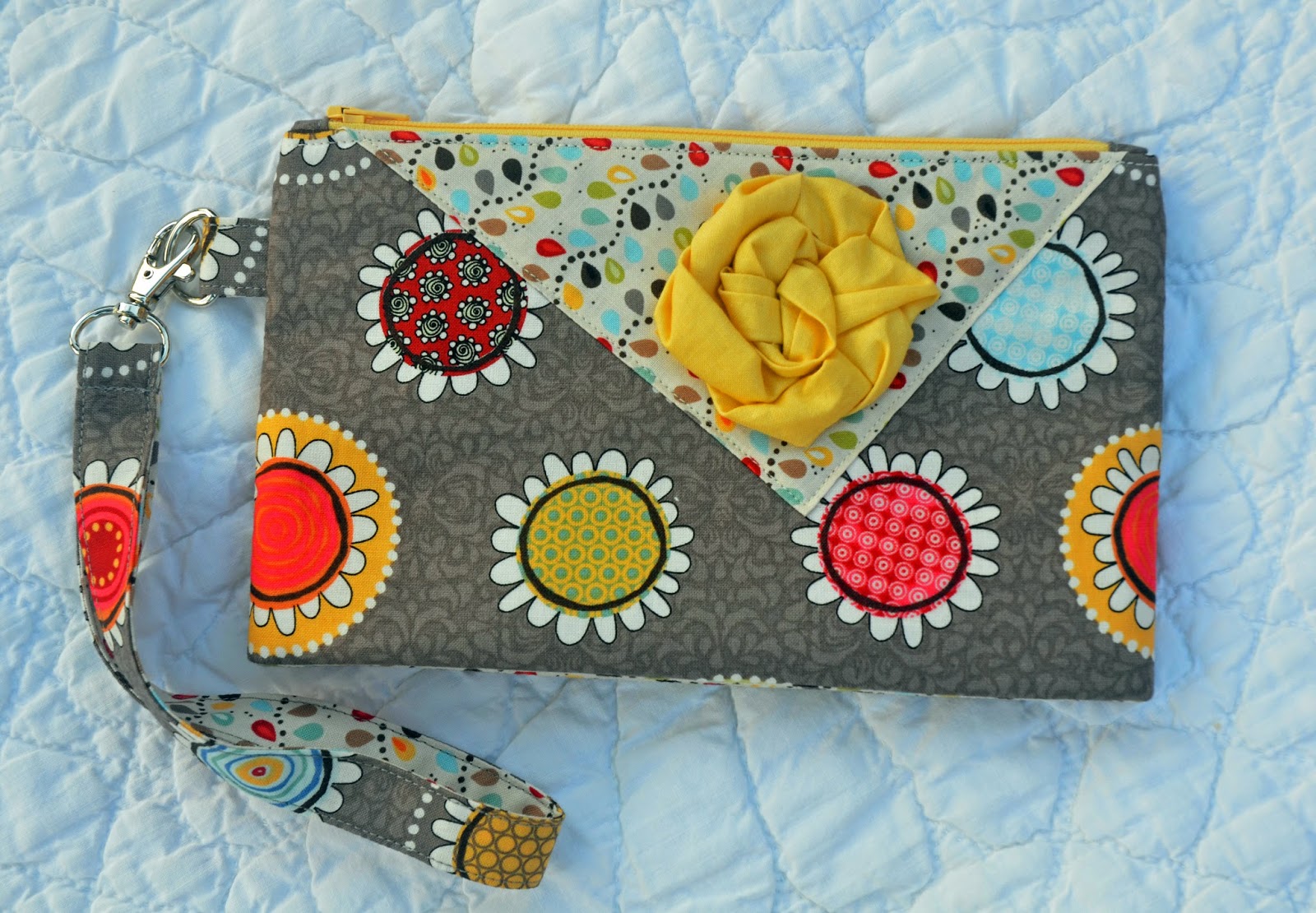 While I'm waiting for this pizza to bake, I'll fill you in on my latest project. 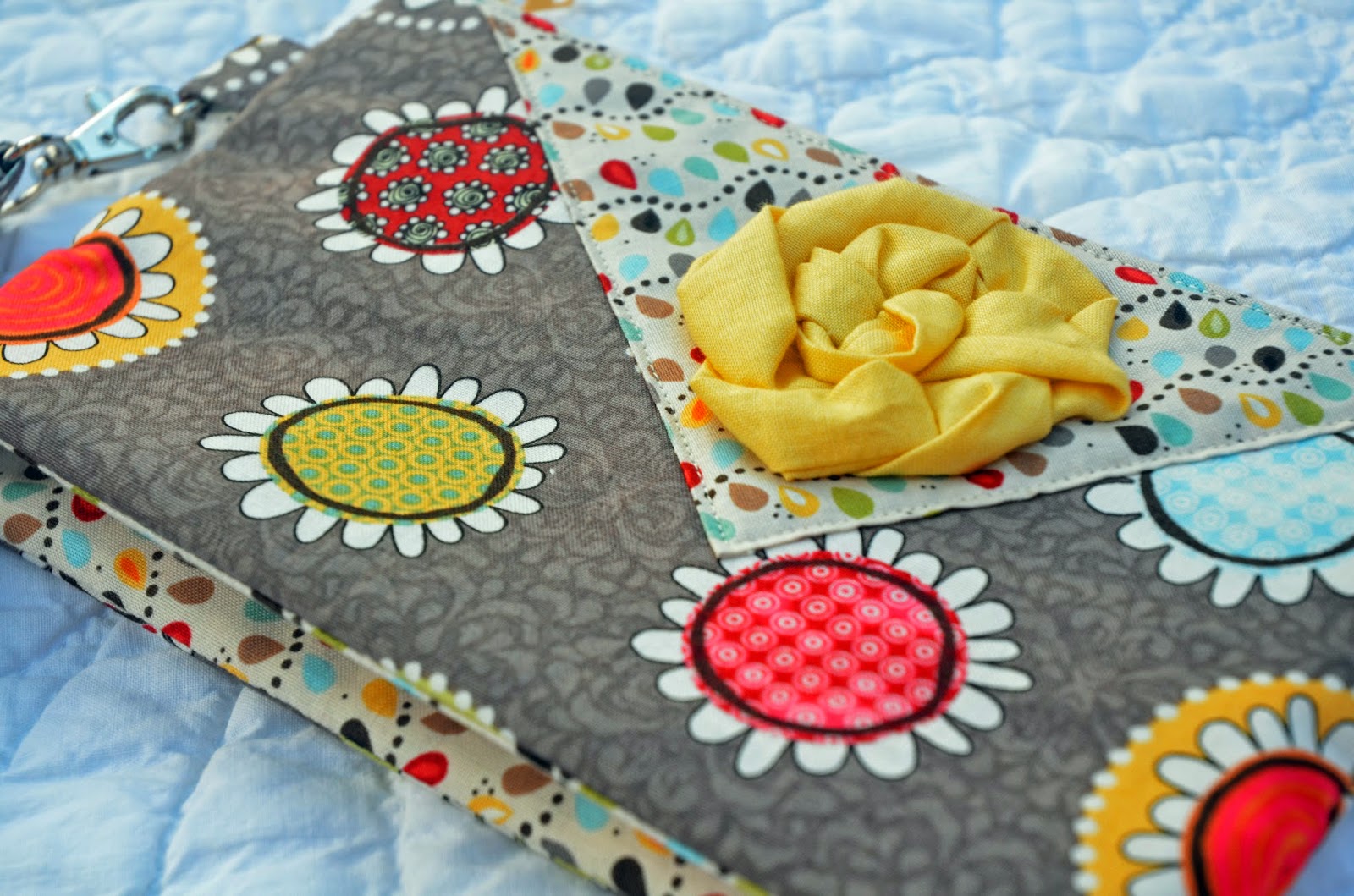 I've made a few of these Lollipop Bags by Atkinson Designs as thank yous for friends and for swaps and that kind of thing, but as much as I like them I've never made one of my own. 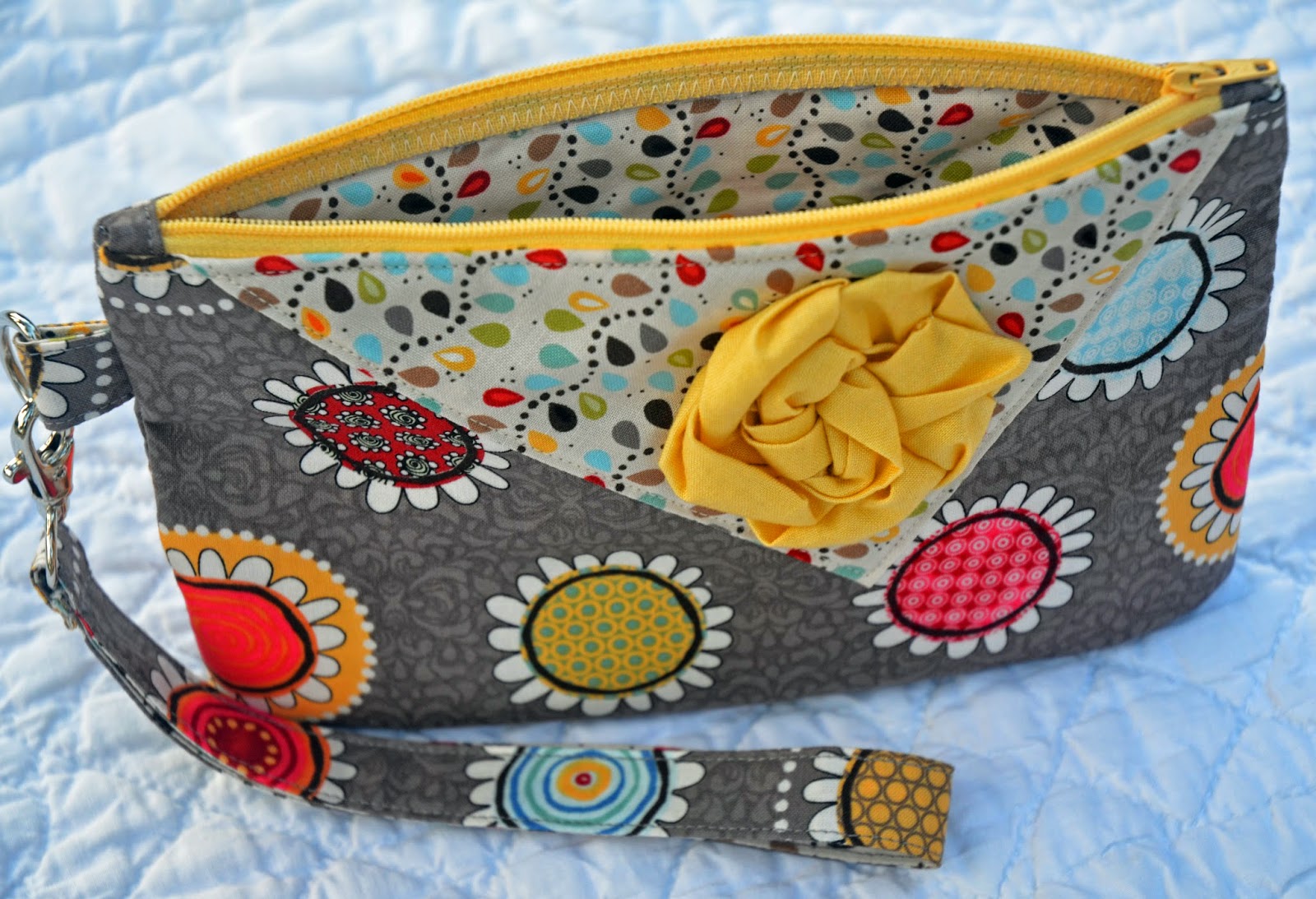 They've been on my list for a few years.


There's even a pile of fabrics here, some of them cut and ready to go, that I've been meaning to use for a few of these bags for myself. 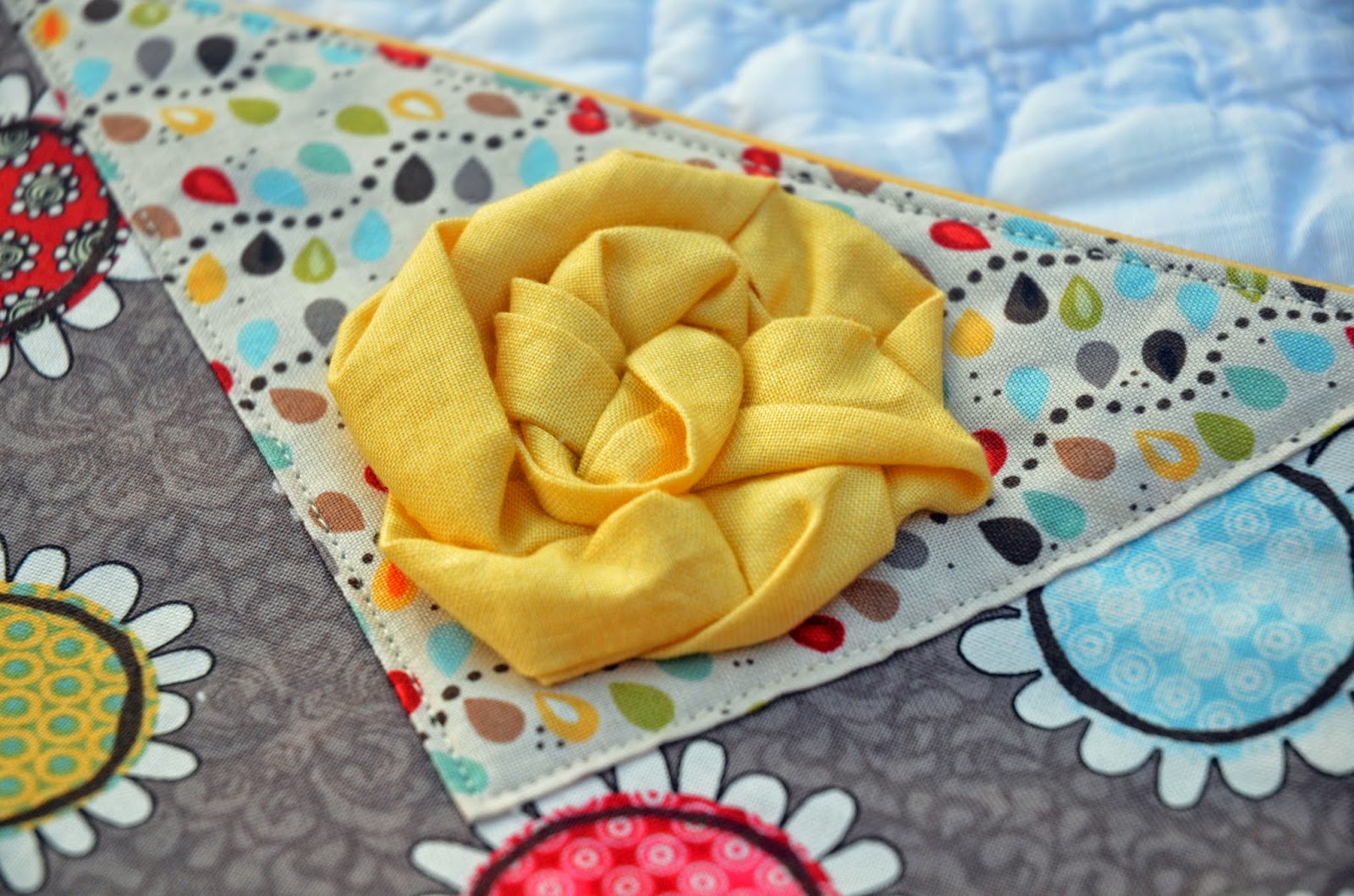 I'm happy to tell you that in between multiple track meets, soccer games, and the laundry that follows I've gotten one done!

This bag expands at the bottom which is one of the reasons I like this pattern so much.


The swivel clip is fun too. 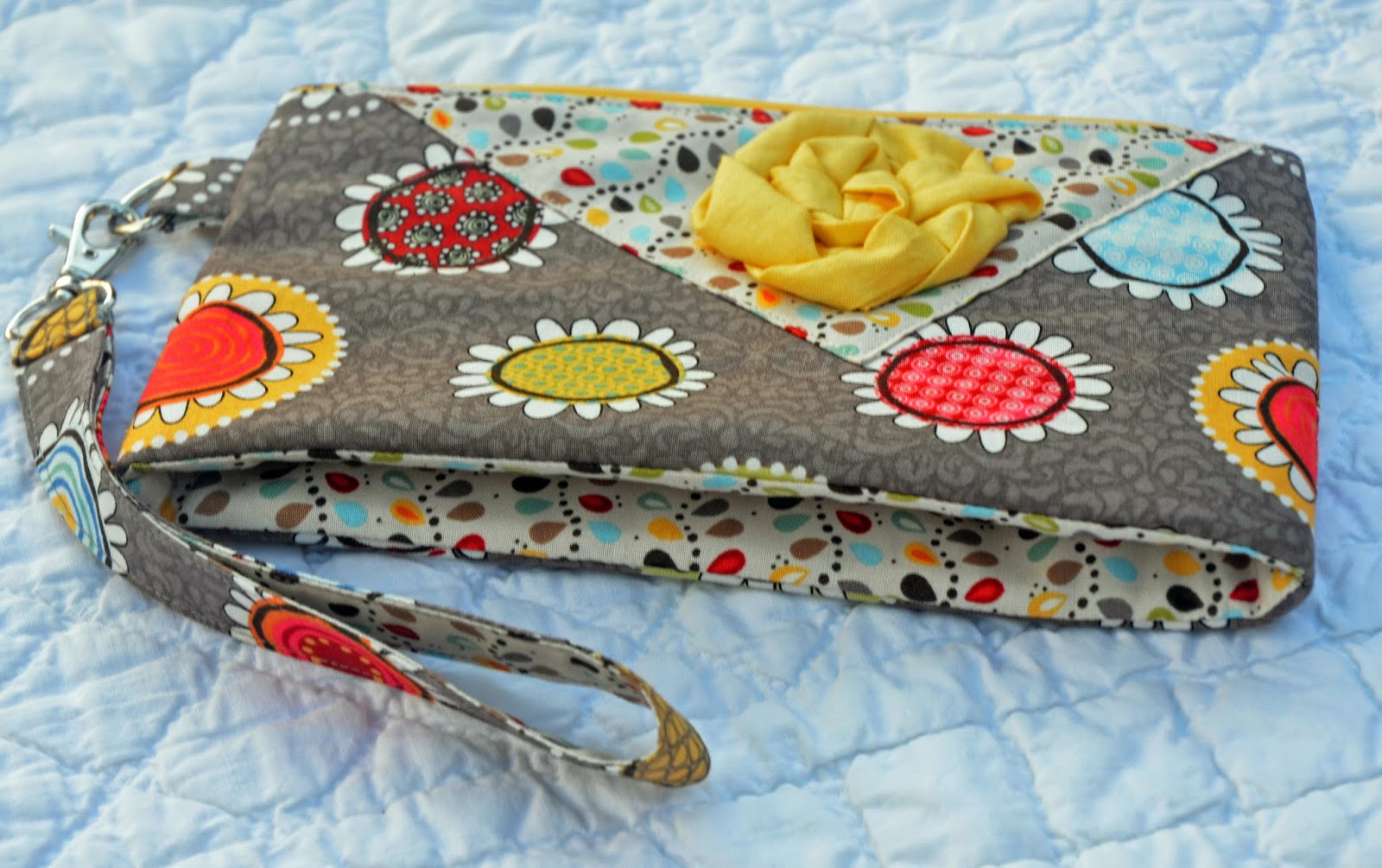 I love making quilts, but a quick bag project is a wonderful thing! 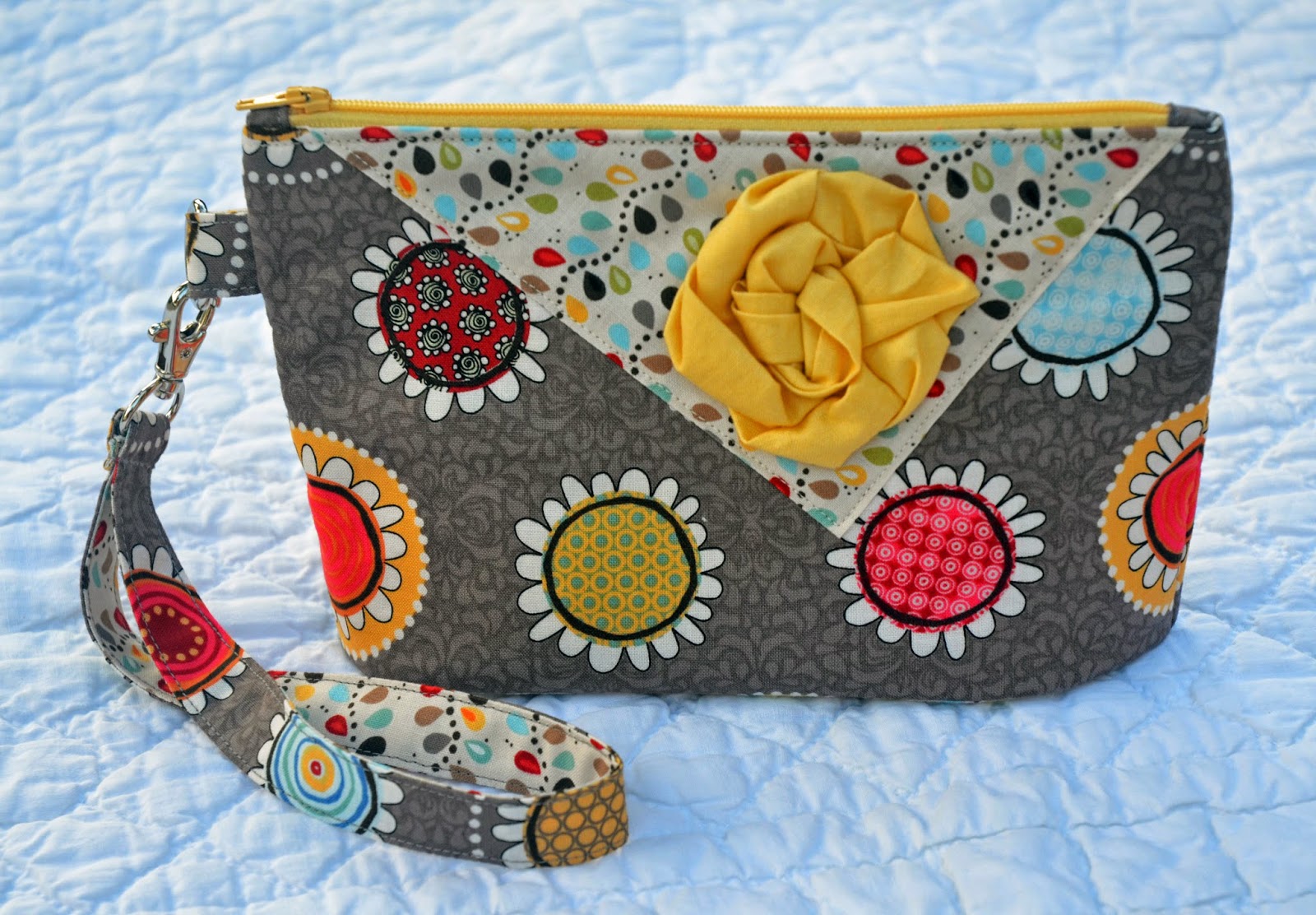 Also, next week is our Spring Break!  Who knows what kind of sewing trouble I'll get into!

We've got a few things planned. I'll keep you updated.

By the way, wasn't it just Christmas?  Now it's Spring Break?  What happened? 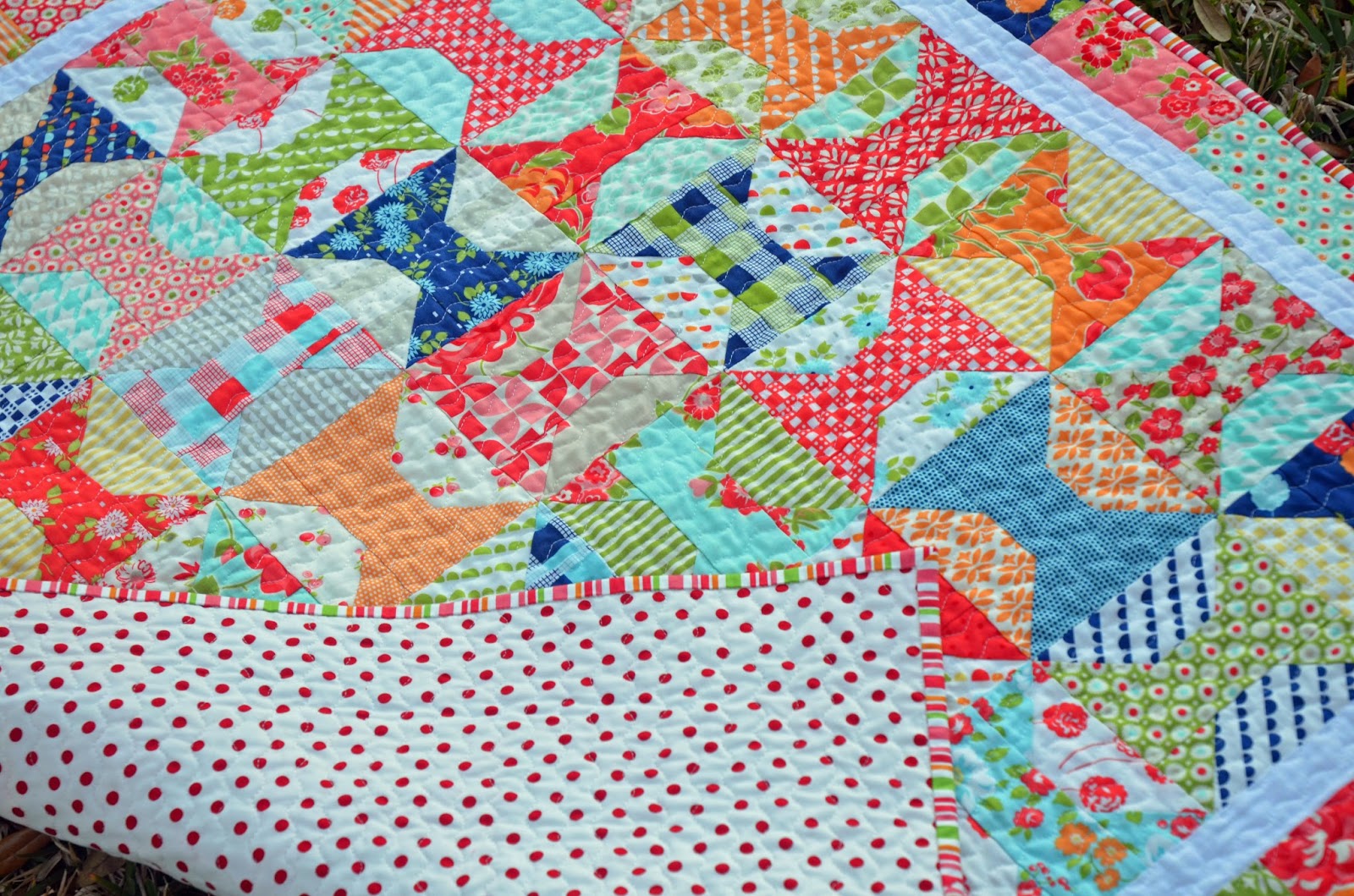 I'm so happy about this one!

The pattern was created by Carrie Nelson and it's called Gentle Art.

You can see it before quilting HERE.

It took me awhile to get from to start to finish, but now it's totally done. 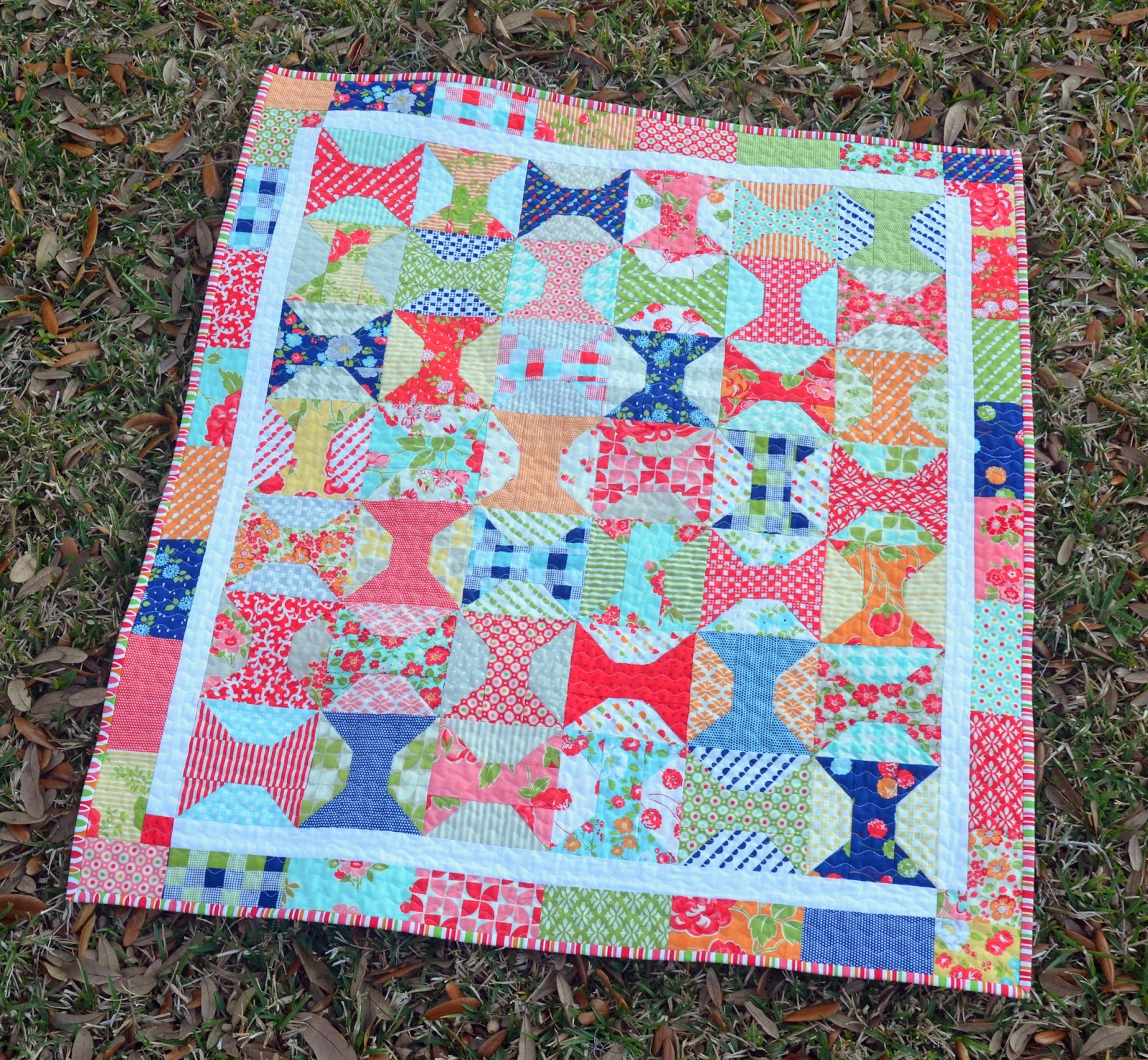 I used a mix of at least three Bonnie and Camille fabric lines and it made this quilt so bright and cheerful I just didn't want to finish it.

It's one of my favorite quilts ever.

I wouldn't have thought that when I got started.  Don't I say that a lot? 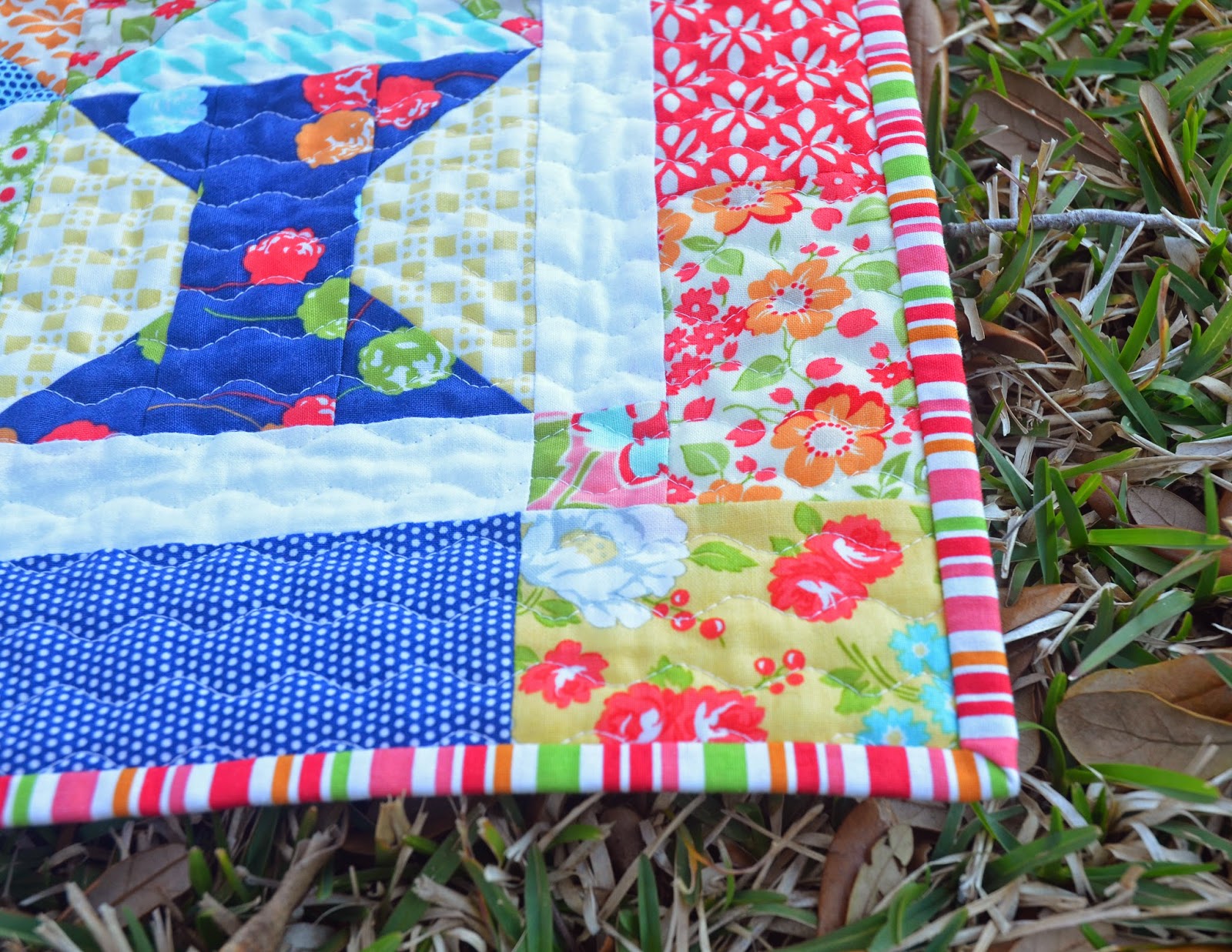 When I found this binding fabric at my LQS I knew it had to be on this quilt.


Of course, once I got home I did have my doubts.


I started wondering if a busy quilt like this could handle the stripes, but I went with it anyway and I'm so glad I did! 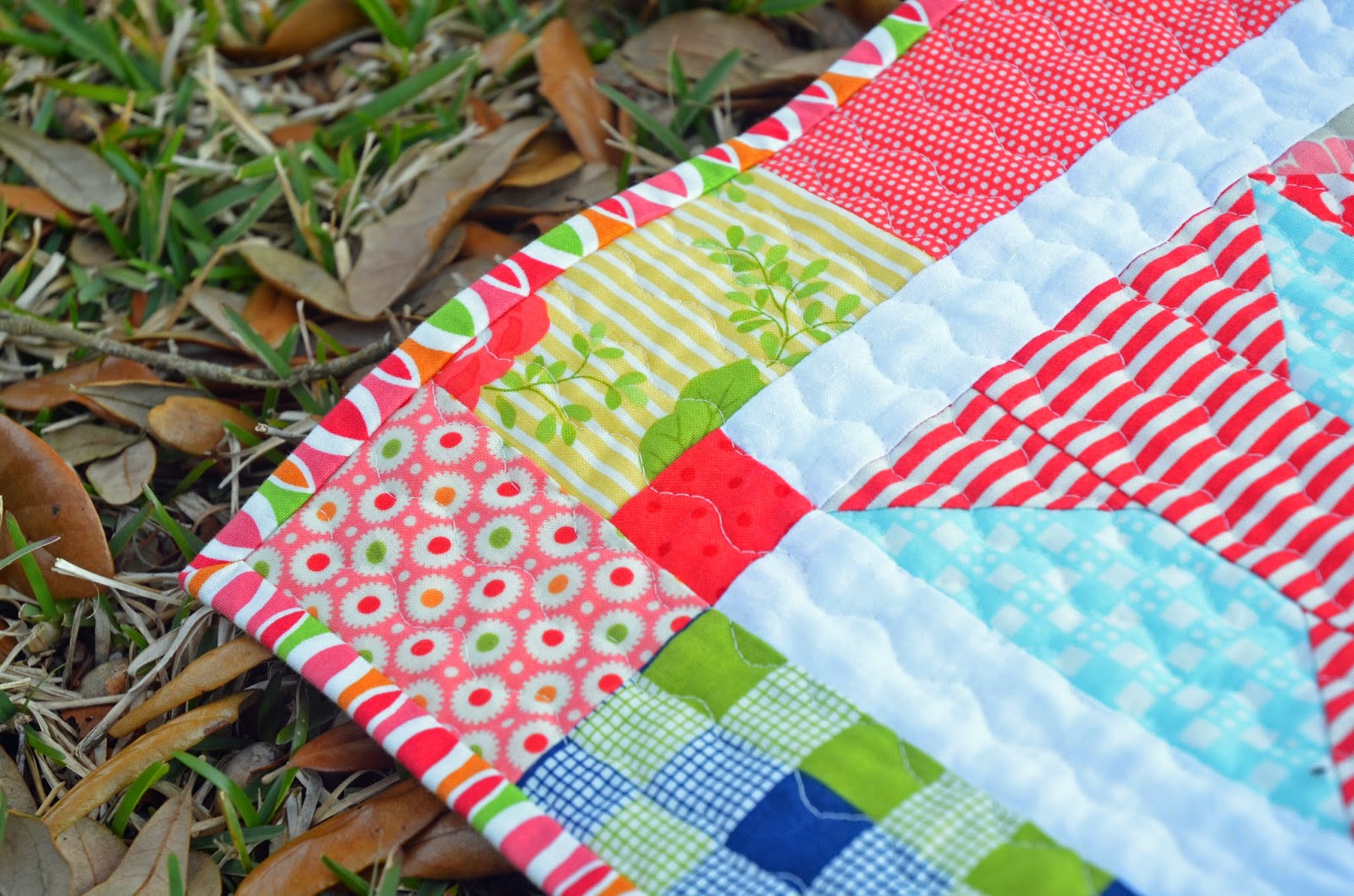 Did you notice that the stripes aren't really stripes?  You can see them HERE.


They are kind of ovalish.  Is that even a word?


I spent lots of time.......way too much time in fact........trying to cut the fabric so that you could only see stripes with no evidence of ovals, and it didn't work.

It freaked me out a bit.


The stripes on my binding were uneven.  The horror! 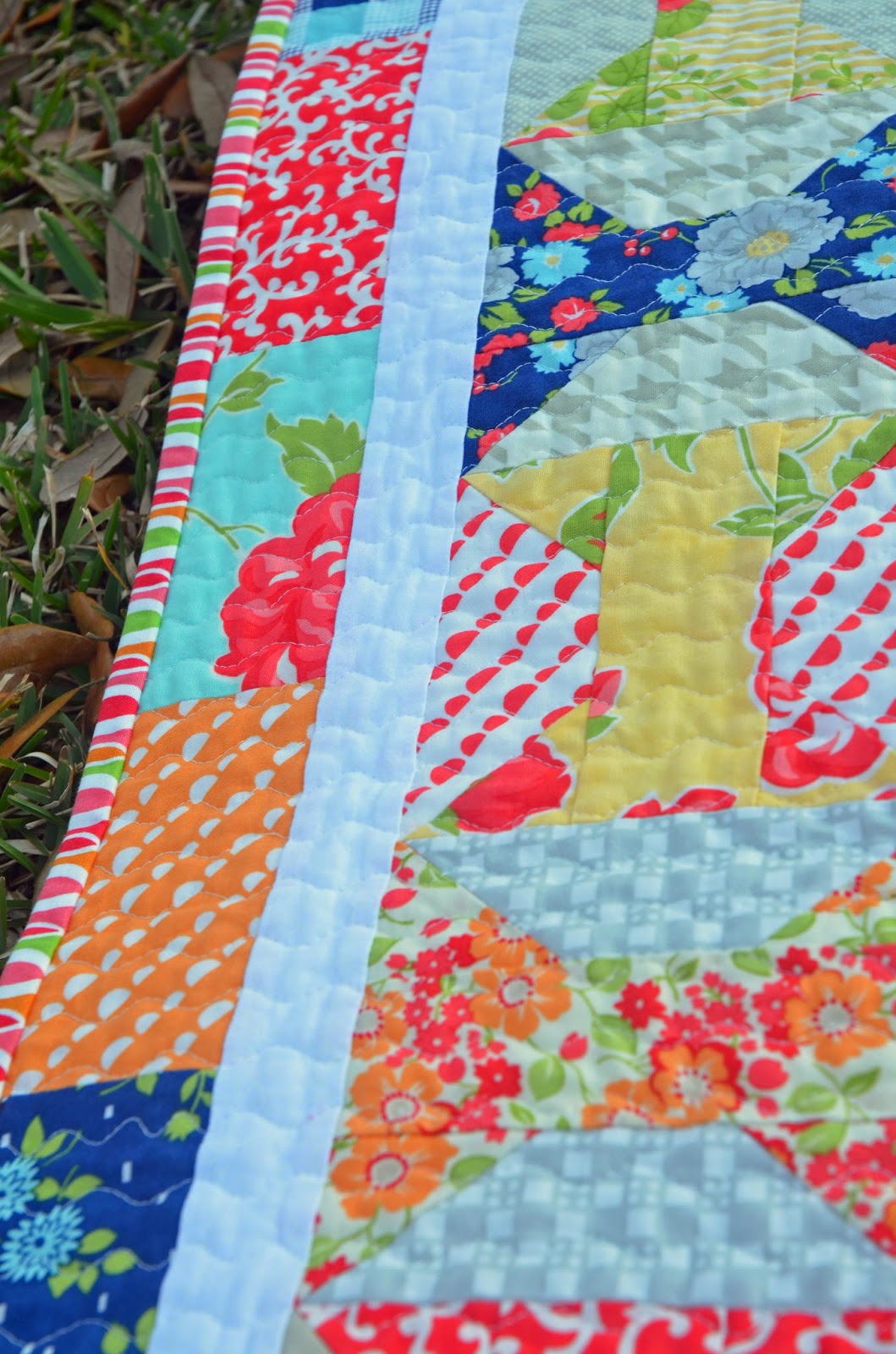 
Lo and behold I decided I like the stripes, or ovals I guess, uneven all the way around the quilt.


I certainly didn't plan it that way, in fact I took great pains so it wouldn't happen, but it did and now I'm glad.


That's something else I've been saying a lot lately.  I need to remember that when things are going "wrong". For the quilting I used that wavy stitch that you've been seeing around.

I think it was perfect for this quilt.  You can read more about it HERE if you're interested. 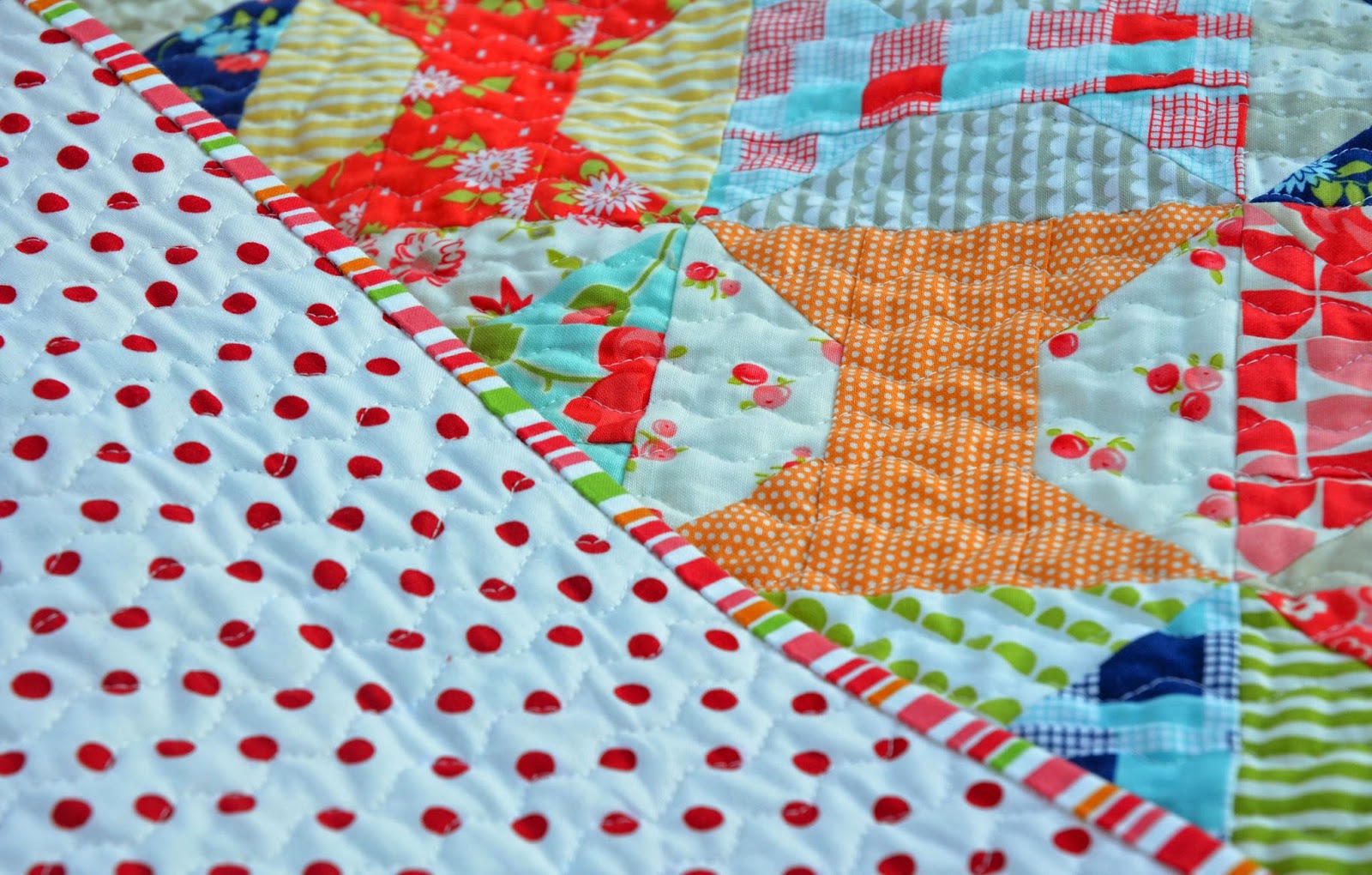 That wavy stitch is fun to do and there isn't a whole lot of thinking involved when you are quilting with it. 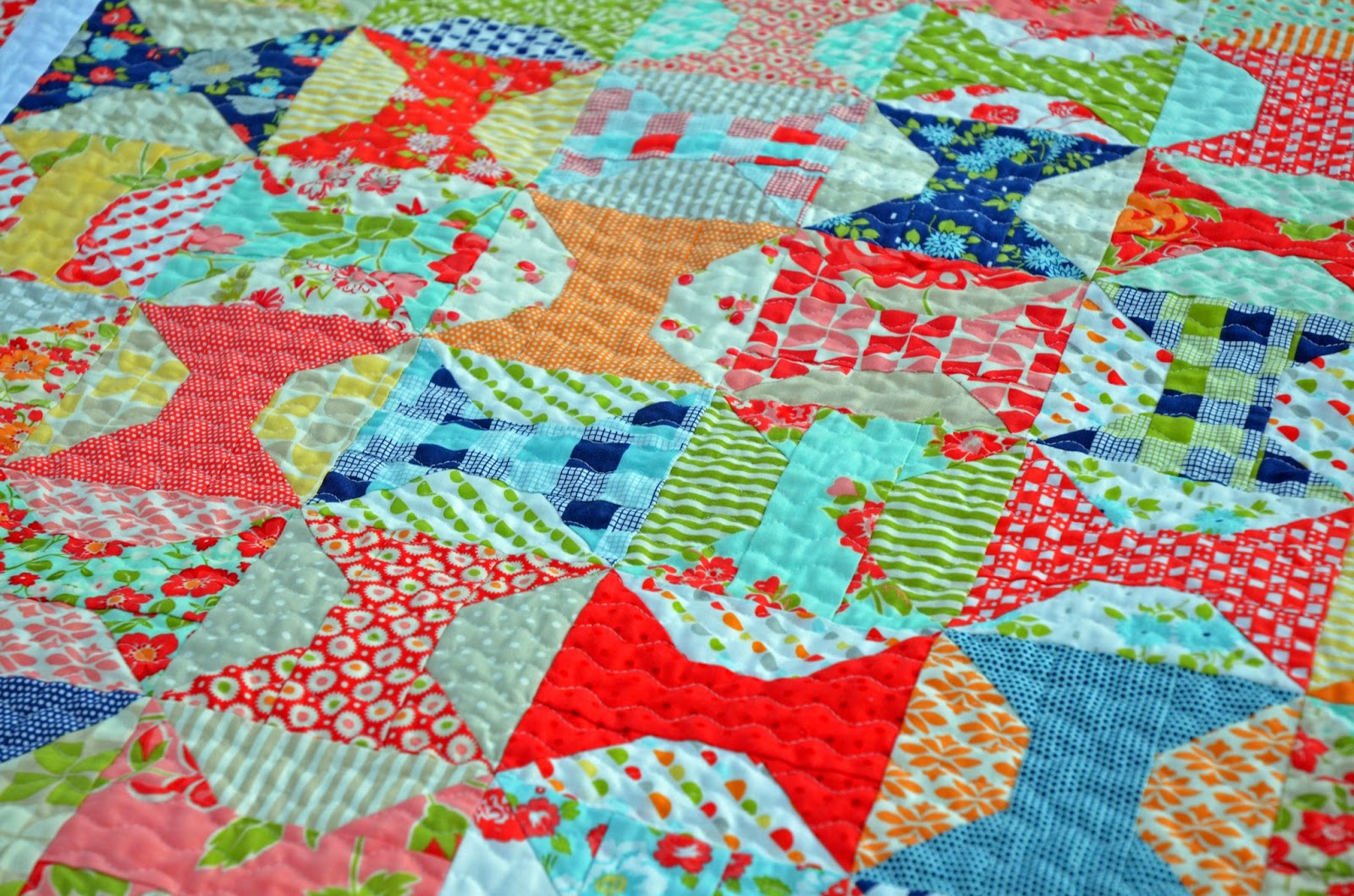 This quilt is bright, fun and cheerful!

Just what I needed for the beginning of Spring. 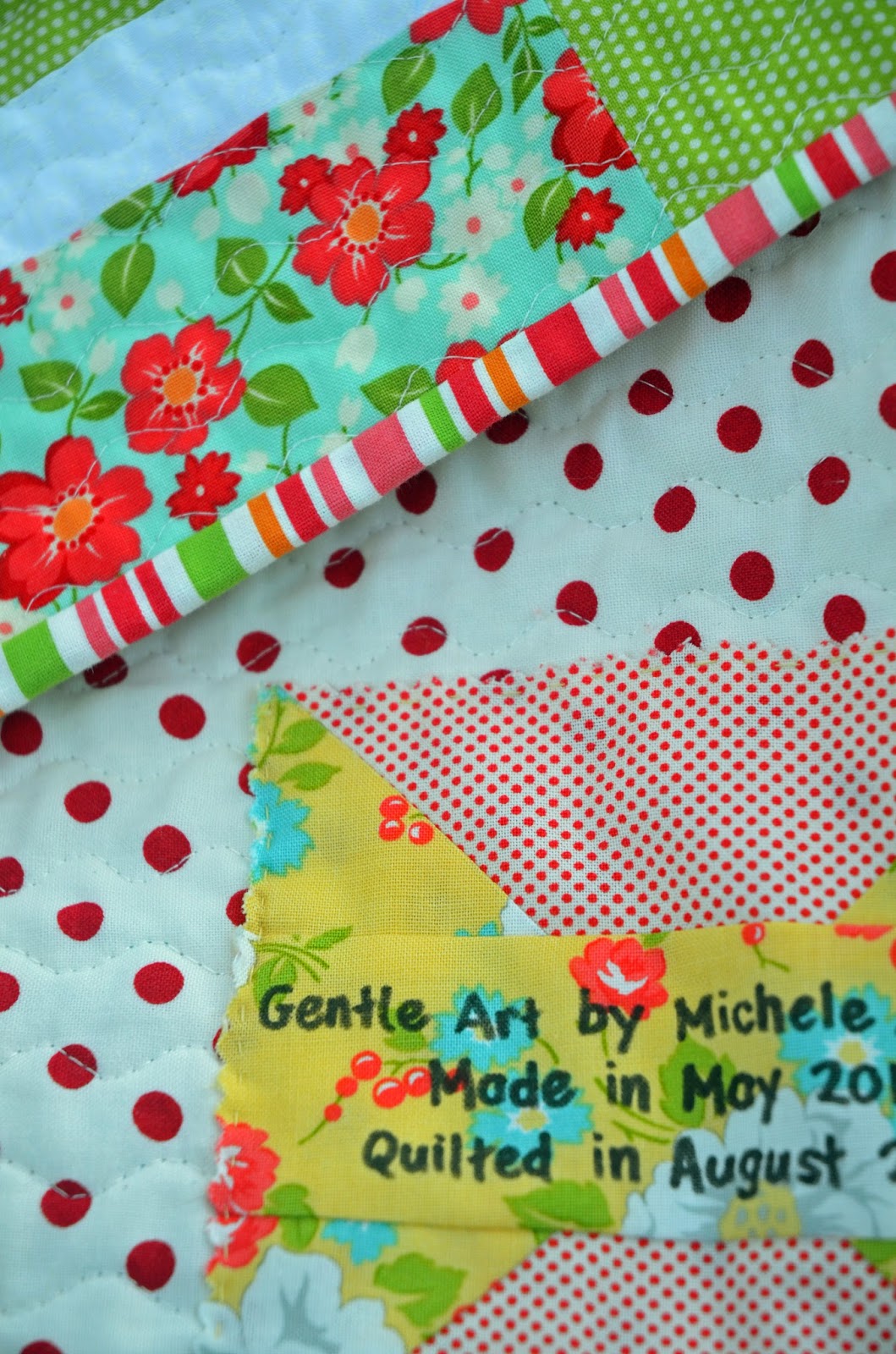 Oh, last, but not least the label!

I label every quilt and this one is no exception.

A sweet blog friend of mine just sent me tons of labels she found while attending a quilt show!

Labels can be difficult to find.

On this quilt I went with an extra block that didn't make it on the front, but it made the perfect label.

Now it's is totally finished just in time for Spring!