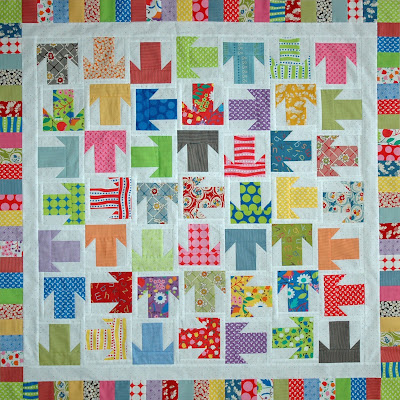 Bright, cheery, and fun "T's" everywhere you look! I finished my Bibelot this afternoon using both Hoopla and Punctuation charm packs and a white background fabric with mini multi-colored polka dots from the fabric line, Neighborhood. This layout took a few tries for me, but I'm finally happy with it. 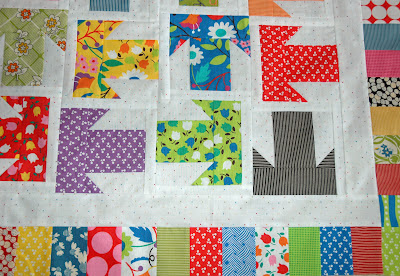 The rows were put together Thursday night, but then I realized half of my quilt had the block borders going in straight rows, not staggered like I wanted them to be. Somehow when I started the layout I thought the haphazard look I really liked about the quilt came from the T's going in different directions so I focused on that and also the color placement. Once the rows were sewn together and I got a better look at it, I realized I really needed to focus on the borders being staggered to get the look I was after, so, as Kermit would say, "rippit."  (I watched The Muppet Movie last night.)


I tried to only change the direction of the blocks and not move the colors around, because I liked the fabrics where they were, but somehow the straight configuration of the block borders just migrated to another spot on the quilt!  Since I really liked the way Carrie's layout looked on the cover of her pattern, I decided to go with the way she had her blocks placed, with a few changes. This was one of my favorite Schnibbles to make despite several tries with the layout.  I liked how the borders on two sides of the blocks made the quilt look so random, although mine certainly wasn't!

There are lots of beautiful Bibelot quilts floating around out there in Blogland and I can't wait to see even more of them in the parade on Sinta and Sherri's blogs in the next few days. I wonder what pattern is in store for April?

LOVE it! Great fabrics - of course that dotty background makes me smile! I had trouble getting my blocks "irregular" but in the end its ok. Can't wait to see the parade this month - I know it will be wonderful.

So stinkin' cute Michele! Love that pattern and you have great fabric!

Happiness all over the place. I love the mini dots too!

Very fresh and bright quilt! I love how it patches the patchwork borders on the sides of your blog! You seem to say the similar thing about placement as I did. I can't wait to see the whole parade!

Ohh, I love this one. So bright and fun! :o) And the background fabric is perfect. So cute!!
xo

This speaks summer to me!! And beach!

Your quilt looks fabulous. Love all the happy fabrics.

I love how your Bibelot quilt came out Michele. So bright, so you.

I love the mini dots as well! Great quilt, you did a wonderful job with fabric selection. I'm glad you figured out the perfect layout and color placement. I can't imagine it looking any better than what you ended up with!

Really cute! Waiting to see our works together...kisses from Spain

Oh my gosh Michele - I LOVE those prints and the background dotty fabric is sooooo cute! Your Bibelot is amazing! Good job! :-)

I love everything about your Bibelot! The background polka dots are perfect ~ it's all perfect.

If it makes you feel better, laying out the blocks was an entertaining process for me too. There were a few times when I wished I hadn't been quite so "random". :)

Love the choise of color and makes me feel good :)

I just love this quilt!!! Great fabrics! It's so bright and cheerful.

Cheery is the perfect description of your Bibelot - I love it! o:) Your randomness took so much work to achieve - me too! LOL

Love the colors! So bright and cheery!

Your quilt is gorgeous and just has a happy feel to it! I love it.